Log in to flag trips of interest and email organizations directly through our directory.

If this search was helpful to you, consider supporting us with your $2 donation.

Your gift will support continued site development, maintainance of our online database, and keep our service free for prospective medical volunteers.

Please register or login to use this feature.

Sign up for free to flag trips of interest and email organizations directly through our directory.

There was an indelible moment in 2003 in which then-president George W. Bush stood atop the USS Abraham Lincoln aircraft carrier in front of a backdrop that declared “Mission Accomplished.”

It was the moment that heralded the end of major combat operations in the Iraq war, after which Iraq rapidly transitioned into the stable democracy we see today.

Just kidding. It was the beginning of a decades-long quagmire that would prove both catastrophically expensive and cost thousands of lives. And speaking of quagmires, you’ve probably already guessed where I’m going with this.

When we entered this pandemic war, the announced goal was to flatten the curve to avoid overwhelming our critical care capacity. In keeping with the existing public health literature, the objective was to avoid having our limited human and physical resources collapse under unsustainable pressure. Even though the same number of people would eventually become infected and even die, we would at least be able to provide them with the best possible care.

To that end, a number of graphs surfaced seemingly overnight that looked like this: 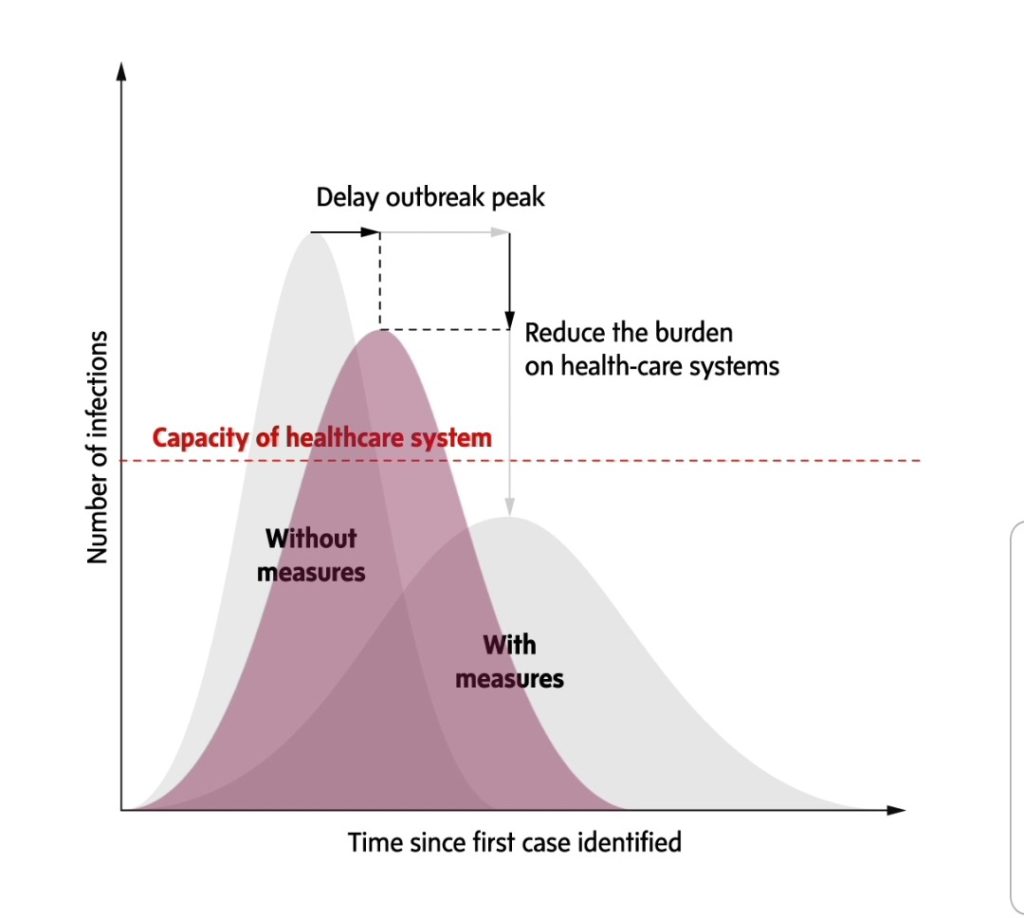 After being locked down in our homes for over a month, how are we doing with this experiment?

As before, here are the corresponding curves for critical care admissions in two Ontario hospitals. The first is my own, in a mid-sized Ontario city, and the second, the critical care unit at the University Health Network in Toronto. 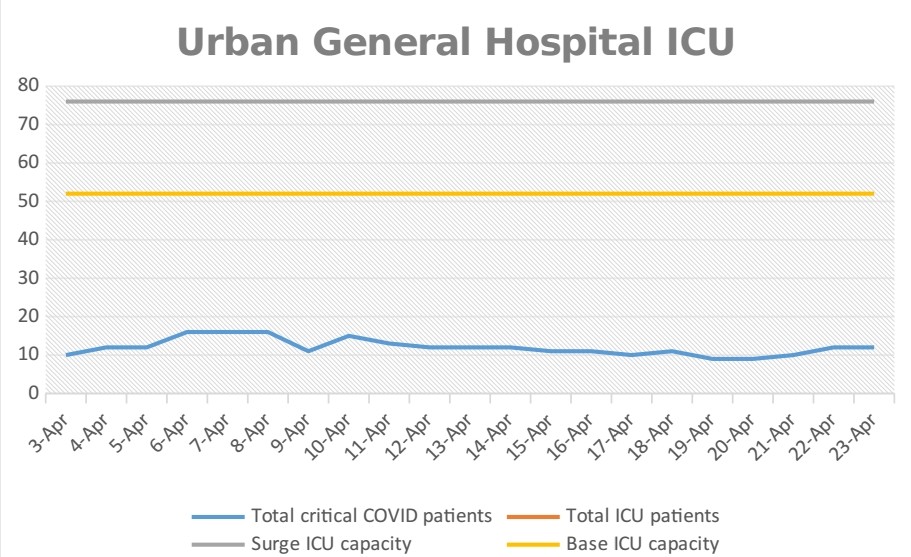 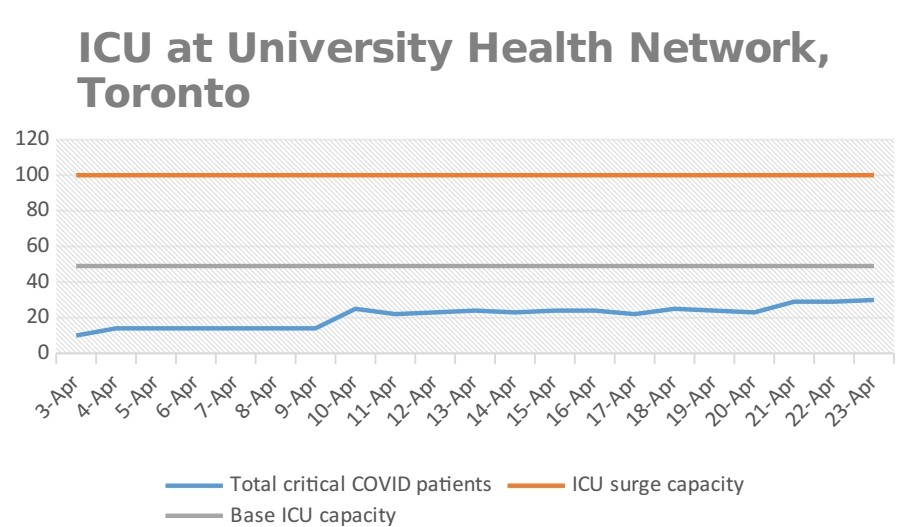 You’ll notice that these curves not only look flat, but that any hint of a surge is nearly indistinguishable. Put simply, these are empty hospitals – with few exceptions – and you’ll find hospitals just like them all across the province. You’ll find similarly empty hospitals across vast swaths of the United States. You’ll find them in the United Kingdom, where one third of beds are not filled despite large numbers of daily COVID deaths. You’ll even find them in the Philippines, which boasts a COVID-19 website more comprehensive and transparent than anything Canada has produced since the outset of the pandemic.

Mission accomplished. So now what?

This is the question that has mystified many laypersons in the media. With the stated goal of flattening the curve seemingly achieved, the obvious answer would be that it’s time to reopen society, at least to a modest degree. But instead, the prevailing response has demonstrated a fundamental lack of understanding of the actual science behind the policies themselves. Take, for example, the following experiment in gaslighting in the National Post (emphasis added):

“The COVID-19 pandemic appears to have peaked in Ontario, several weeks ahead of earlier forecasts, and hospitals have largely escaped the feared surge in critically sick patients, provincial health officials said Monday. While earlier, frightening models predicted a peak in cases in May, shelter-in-place and other public health orders “have accelerated the peak to now,” according to the fresh data.”

Obviously, this doesn’t even make sense within its own paradigm of flattening the curve, since the original goal of such policy was to delay and extend the pandemic peak.

Nonetheless, there is still a plan. The roadmap for Canada calls for a loosening of restrictions if there are no new cases for 2-4 weeks, with a return to lockdown if there is a spike in cases. The only possible response to this is: why wouldn’t there be a spike?

How are we doing with herd immunity?

A spike is guaranteed because despite all our work and sacrifice, we are no further ahead than we were at the beginning of March. One could argue that we’re actually worse off because now we’re also broke, tired, and bored.

With antibody tests now widely available, we’re seeing the first few studies involving tests of broad cross sections of the population. They’re about 99.5% specific for previous COVID-19 infection, which sounds great until you realize that for every 100 people told they have antibodies to the infection, it will only be the truth 77 of those times. Other antibody tests are even less specific.

But I digress. In Europe, somewhere between 2% and 12% of people carry antibodies to the COVID-19 virus. A more recent study in Stanford, California suggested that about 2.5% of people had already been exposed and were presumably now immune. That makes our current extreme lockdown policy a spectacular failure from almost any perspective. As Dr. David Shriger, a prominent emergency physician, points out:

“It’s worked too well in the sense that the vast majority of people are still not immune. If we stop doing what we’re doing, and just let people start contaminating each other so that the number of cases goes up, it’s expected that we’d be right back at square one. The fact is we aren’t anywhere near herd immunity, and we’re closer to having no people infected than we are to having sufficient numbers infected. We’re going to be right back where we started, or even worse. We’re really nowhere towards fighting this epidemic, which is both humbling and frightening.”

And according to Dr. Stuart Swadr:

“It’s funny because I’ve heard it described as the worst of both worlds. It’s not high enough. It’s not low enough. It kind of stinks. I don’t like where we’re at.”

I suppose we could simply stay locked in our homes for 12 to 18 months until (perhaps) a vaccine becomes available. At least, we could do so if quarantine were a benign intervention. But it’s not. The harms of quarantine are quantifiable.

They take the form of deferred colonoscopies, cancer surgeries, palliative chemotherapy, and other urgent medical services. They include patients with heart attacks and strokes who fail to come to the Emergency Department for treatment. They include the near-certain deterioration in mental health as many struggle with isolation, unemployment, and substance abuse. And on a larger scale, they extend to civil unrest, as in this stampede for food by hungry residents of a slum in Kenya.

On the balance, it’s still possible that indefinitely quarantining the healthy is a great idea, but since it’s never been attempted before, the burden of proof falls upon those who continue to advocate for it.

We should view each of our successive public health interventions as if we are gently adjusting a dial – one that has a delayed response.

The incubation for COVID-19 is five days, and it takes an average of ten additional days between symptom onset and a patient being admitted to hospital. That means that anytime a modest adjustment to the dial is made, it should take approximately two weeks to see an effect. An uptick in cases is to be expected, which should be weighed against the need to sustain these more palatable measures for the 12 to 18 months it will take for a vaccine to become available.

What we might end up with is a policy similar to that of Sweden, which contrary to popular belief, has not been overwhelmed and is holding its own quite well. Sweden has tripled their ICU capacity, implemented moderate social distancing measures, and banned mass gatherings. But what they have not done is locked down. Their daily hospitalizations have stabilized and are even declining.

Look back at the flatten the curve figure from the beginning of this article. Which curve more closely approximates the desired curve – ours or theirs?

Sign up for free to flag trips of interest and email organizations directly through our directory.

Evaluating the reliability of the STAT tool for medical missions

COVID-19 in Ontario: Is it safe to come out yet?

“It became necessary to destroy the town to save it”: The case against social distancing

The trouble with clinical decision making on short-term medical missions

Read Blog
This rating is under dispute. This response has been disputed by one or more respondents. No information. If you've volunteered with this NGO, you can support them by taking 5 minutes to complete a post-trip review here. If you are a program administrator, you're in the best position to accurately describe your project's activities. Learn More. Unedited project descriptions come directly from the organizational website. Mobile or informal clinics refer to clinics that may temporarily set up in a schoolhouse, church, or other nonmedical facility. Many of these organizations offer and encourage volunteer placements longer than the minimum length. Generally includes both medical and nonmedical volunteers. Rural is defined as more than 1 hour to a tertiary care hospital by local transport. A measure of the cost effectiveness of operations. Includes financial transparency and knowledge of the costs of the project to the host community. A measure of the efficiency of operations. Included clinic publicity, staffing plans, and existence of a triage system. A measure of the ability of the project to deliver positive outcomes. Includes use of evidence based practice, effective medical records and documentation, and post-trip feedback from volunteers. A measure of preparation by the organization. Includes screening of volunteers, predeparture training, resource availability, and use of clinical protocols. A measure of the integration of education into the project, including training for local health workers, and health promotion. A measure of how the organization fosters independence for the host community. Included establishing a continuous presence, local leadership, continuity of care, and collaboration with local health services.